Funding: The Finnish Cultural Foundation has supported the work at the Hanko Bird Observatory. The work of A. Lehikoinen and L. Sokolov was funded by Academy of Finland (Grant 275606) and Zoological Institute RAS (research project AAAA-A16-116123010004-1), respectively.

Abstract: Climate change has been shown to shift the seasonal timing (i.e. phenology) and distribution of species. The phenological effects of climate change on living organisms have often been tested using first occurrence dates, which may be uninformative and biased. More rarely investigated is how different phases of a phenological sequence (e.g. beginning, central tendency and end) or its duration have changed over time. This type of analysis requires continuous observation throughout the phenological event over multiple years, and such data sets are rare. In this study we examined the impact of temperature on long-term change of passage timing and duration of the spring migration period in birds, and which species’ traits explain species-specific variation. Data used covered 195 species from 21 European and Canadian bird observatories from which systematic daily sampling protocols were available. Migration dates were negatively associated with early spring temperature and timings had in general advanced in 57 years. Short-distance migrants advanced the beginning of their migration more than longdistance migrants when corrected for phylogenic relatedness, but such a difference was not found in other phases of migration. The advancement of migration has generally been greater for the beginning and median phases of migration relative to the end, leading to extended spring migration seasons. Duration of the migration season increased with increasing temperature. Phenological changes have also been less noticeable in Canada even when corrected for rate of change in temperature. To visualize long-term changes in phenology, we constructed the first multi-species spring migration phenology indicator to describe general changes in median migration dates in the northern hemisphere. The indicator showed an average advancement of one week during five decades across the continents (period 1959–2015). The indicator is easy to update with new data and we therefore encourage future research to investigate whether the trend towards longer periods of occurrence or emergence in spring is also evident in other migratory populations. Such phenological changes may influence detectability in monitoring schemes, and may have broader implications on population and community dynamics. 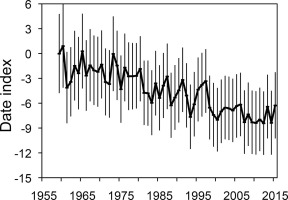 Intrusive Methodologies: Mist-netting of birds at some study areas.